Kearsarge is my binky; my gateway drug to this whole thing; a mountain I have summited by bike many times now.  To not go up at least once in a season is a tragedy.  November is an incredible time to go up, as the road is closed to cars, the temps can be very agreeable,and the solace is perfect.  The foliage is long gone, but who cares.

It took the requisite half hour to get dressed; par for a ride in the fall where you need to dress somewhat predictively.  Base layer and toe covers and arm warmers and leg warmers and stashing a hat and extra socks and a bottle full of tools and bottles of water and which glasses and where is my phone and when do we actually get to ride.

I smashed down a small piece of toll house pie just before I left, and topped up two bottles of Skratch.  I zip up my form fitting pink Velocio vest with the road rash along the neck; a garment I haven’t worn once since my accident.

Exactly 1.3 miles down the road, I realized I had not grabbed my wallet or otherwise taken any money. This was going to be a problem, as I expected this out-and-back to take just about 3 hours, and that is definitely an amount of time that requires me to eat.  I had no onboard food as it was.

As I stood there, for some reason 1.3 miles seemed inconveniently too far to backtrack.  And I had remembered playing this exact game before, once, in a mountain bike race. So armed with only two bottles of minimally caloric Skratch, and no real ability to obtain additional food or water, I forge ahead.

A mile of pavement later, the road turns to dirt for the next five and half miles.  It’s net downhill, and I’m absolutely on top of the world, ripping along like I never missed a beat this year.  I’m smart enough to know that two things are at play here – one, that it’s going to be net uphill and a lot slower coming back, and two, that it seems easy because I’m going out a lot harder than I think I am.  Especially for someone with no future plans for food or water.

I have keen awareness of the food situation, and am constantly scouting the trees for apples.  They seem like my best chance at free nourishment, but never materialize.  Only two trees with viable apples present themselves along the way, and both are in someone’s yard, and the owners are home, and this is not the kind of country where you dress up in spandex and just walk up to someone’s tree and take their apples.

40 minutes into the ride, I get that funny feeling that I’m going flat and sure enough, we’re on the side of the road changing a tire.  It has punctured multiple times.  Rather than carefully evaluate why this has happened, I take a cursory look at the tire, patch the old tube, and stuff it in my pocket.  I use the one new tube I brought along, and top it off with one of the two CO2 cartridges I brought.  This leaves me able to sustain exactly one more flat, and after that, I’m calling for a ride.  I probably could have planned that a little better, but I’m totally off my game this year.  This is only my third ride longer than an hour all year. 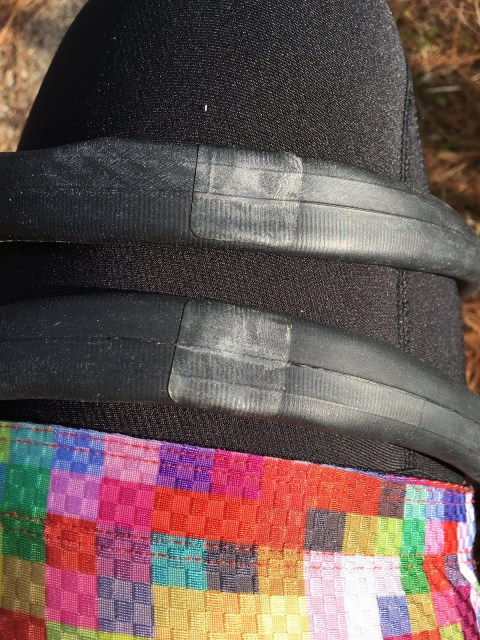 My effort is very metered as I approach the mountain, and as much as I climb it.  I actually feel like I have great power today, and were I healthy and better armed with food, I could make a decent go at it.  Of course neither of those prerequisites being met, I meander up the auto road.  My 39×28 is perfectly easy today.  If any part of me wavers, a simple reminder that I’ve done this climb five times in one day provides ample motivation. 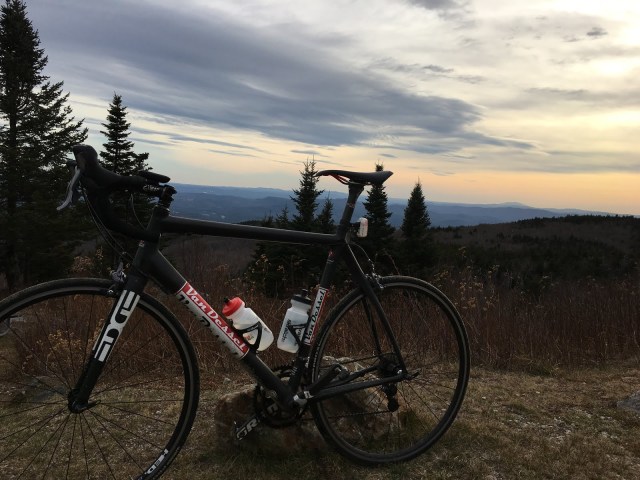 Only a brief stop at the summit, and then it’s time for the return leg of this trip.  As usual, I descend conservatively, and then find myself sipping the very last of my second bottle not long after.  There would be a good hour of work left, and it would be done on zero fuel.  I did not look forward to this.

I continued to scan for apple trees, to no avail.  I even wondered if, like Home Depot does, any nearby stores would accept PayPal.  Or if I had enough information in my phone’s online banking app to pull off a credit card transaction.  Certainly not, and the idea passes.

Onward, to the dirt I came in on.  My speed is considerably slower now; frustratingly slow.  My energy is waning; the grade is in the annoyingly low single digits.  And my front tire is flat again. 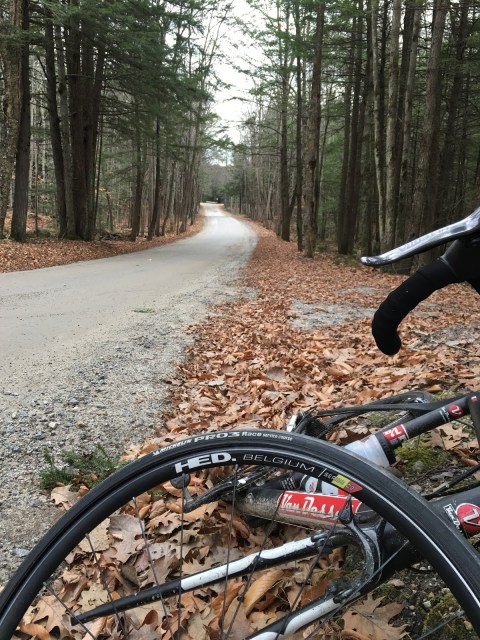 I spend a good 20 minutes on the side of the road, meticulously picking pieces of sharp rock and glass out of the tire.  These Pro3s have a pathetic anti-puncture layer.  I’m not sure what this layer is really supposed to stop, except me from having a continuous ride.

Once I’m sure I have cleaned the tire, I patch this tube and fill it.  I’m now down to zero CO2 and one patched up tube left, which means my next flat requires a ride home.  I’m split on whether or not I want that flat to happen now.

I open Google Maps and see that I am about six and a half miles away from home.  Ugh.  It doesn’t seem like much.  But I know those miles will tick off slowly.  I hop back on, and grind away.

Soon I spot a Red Bull can on the side of the road.  Oh man would I destroy a Red Bull right now; I’ve never wanted one more.  Of course, it’s clear this can is empty.  Which is the state of pretty much every littered can on Earth.

It is at this point that I stop scanning the near forest for apple trees as I ride, and glue my eyes to the edge of the road, basically looking for one promising spec of palatable garbage.  Look at those half empty soda bottles.  What a waste, I think to myself.  I spot a cluster of what have to be empty beer cans.  Could all of them be empty though?  Were one to be unopened, would I drink it?  I might.  I keep going.

Things progressively degrade.  A glimmer of hope once I finish the dirt and find the pavement again soon flickers, despite being only three miles from home.  Horribly, spectacularly bonked.  For long periods of time, riding with eyes closed.  When they open, they are irreversibly crossed.  The worst of it on – would there be any doubt – the same stretch of road where I had stopped to contemplate the retrieval of my wallet.

Only two things were in my head now.  One, that there was a glorious turkey dinner waiting for me when this ride was over.  I was going to obliterate that dinner.

As I grew closer, preparing for the hard right up that driveway, I could think of only one thing: the 22% grade at the end of Mt. Washington.  Leaving the pavement, I sprint.  The inadequacy of my race-spec tires presents itself, albeit slightly.  From somewhere, just ten seconds of will and watts.  I crest, and the ride is done.  And I am done.  I limp inside, change my clothes, and in between taking mouthfuls of food, my head is on the table.

37 miles and 3300 feet of climbing with a half hour mountain climb in the middle; the longest ride I’ve done all year.  The hardest, thanks to my own bad decision making.  But you do these things to test yourself.  To understand what you can do, and what you can’t do.  To somehow learn from them.  To make things interesting.  To up the ante; to make the trivial and mundane something different.

https://www.strava.com/activities/440513430/embed/d1629332910fc012be07e834d125fab44495dcdd
All told I loved the ride.  I do love riding.  I love the sense of preparedness, in all respects, that is required.  Long rides; hours-long rides.  Returning well after you started.  The sense of elation as you descend a mountain you just finished climbing.  The relief of being delivered from hell.

To rediscover all of this, on the verge of Winter.  Nice timing, you idiot.

Laughably, a fraction of the 6 Gaps ride that I did in 2008; going on eight years ago now.  That ride feels both possible and totally impossible now.  It’s there, as it always has been, waiting.

As it turns out, I did this ride with pneumonia.  On meds now.