I decided I would enter the Cat 2 single speed field at Pats Peak a few weeks before the Washington practice ride.  I had never ridden a bike here, but on paper it looked like the kind of brutally difficult effort I needed to put in the bank.

Also bear in mind that I just purchased a fantastic full suspension mountain bike this year.  For reasons I still do not understand, I opted not to race that bike, deciding instead that I would try to turn one gear up the side of a ski mountain for two hours.

I registered day of, and in the process caught a glimpse of the entry list.  It was only going to be three racers, and immediately I get that pit in my stomach.  It’s the feeling of “just don’t screw this up”.

At the starting line, I’m not feeling too encouraged.  Both of these guys have been racing a lot this year, and I on the other hand, have not.  In fact, my only mountain bike race in the last four years was a month ago.  So right away things are not stacking up for me.  But it’s of no consequence really.  All I need to do is finish this race and not embarrass myself.

We take off, and I the guy who I am certain will win this race takes off as expected.  The other guy I am very close to, and because I am turning 40 this year I do this “cagey mind game thing” where “I try to intimidate him”.  What this really means is I burn half of everything that I have blowing past him, thinking it will demoralize him and he will immediately give up.  That obviously does not materialize and within a few minutes he is safely past me and I am about to begin some time alone.

Pats Peak is a fucking terrible place to race a bike, at least if your bike doesn’t shift.  It is a never ending circuit of switching back and climbing, which is precisely what anyone signing up to race on a ski mountain should expect.  There was some riding, yes, but in large part, it was walking.  Lots and lots and lots of walking.  Too muddy, too technical, too steep, there was always a reason prohibiting you from spending more than a few minutes at a time actually pedaling.

The first of two laps was about an hour of this, with me never ever having sight of the other two racers.  I was firmly resigned to my third place position.  The only other racer I had contact with was a woman who had already finished, but was looking for some extra time on course because her event was cut short.  She would ride nearly everything I could not, on account of having a properly equipped bicycle.

About halfway up the mountain on my second lap, I’m in an actual “riding section” that traverses the face of the hill.  I have a bottle in my right hand, and my left is on the handlebar.  For some reason I am going a little too fast, so I grab some brake, which you’ll realize is going to be the front brake.  I immediately eject myself off the bike and through the tape into the tall grass.  As I collect myself on the ground, something has put a nasty gash in my inner thigh.  Great. This is fun.

I get back on and venture ahead, getting to a point where I just need this thing to be done.  I’m really not sure what kind of training value I’m getting out of this endeavor, as it is primarily hiking.  My energy feels pretty good, but it’s kind of useless.  Also my Garmin is now hanging by a thread, having been damaged in the crash, and it’s a constant distraction.

I finally get into the woods near the summit, where we’ll do a little more fucking around before we actually start to descend the trail system to the finish.  I’ve had enough of looking at this Garmin dangling from my handlebar, so I stop and remove it, stuffing it in my back pocket.  I’m tired of wondering if I’ll lose it, so this is strangely liberating.

Before I get going again I scan the area, and I think I see another racer well in the distance through the forest.  The switch flips and I start to give it a little bit of hell, wondering if just maybe it’s one of the guys from my field.  After a chunk of time, sure enough – I think it’s the second place racer I lined up with.  We come into a densely forested section that neither of us can ride, and I start to get that feeling.  The feeling that it’s time to race.

As we forge ahead on foot, he comes to a stop, and I pass him.  His seat and seatpost are absent from his bike, and I offer a word of sympathy before jumping back on and hammering away.  He immediately remounts, and here we are.  Two miles to go, and the podium is no longer decided – there’s going to be a fight.

I am drilling it.  I have never, ever taken so many chances on this bike in my life.  I am certain I will flat out the way I’m riding.  The tires are all over the place, washing out.  The other racer is right behind me, countering everything I throw at him.  But the one thing I can do, that he can’t, is sit.  And when I sit, I absolutely wring myself out, knowing it’s something he won’t be able to do.  I try to imagine how annoyed I would be in a particular section if I couldn’t sit, and then I sit and mash the fucking pedals with everything I have.

In a few minutes time I’m gapping him, and everything is becoming a blur.  I’m riding the same sections that I saw on the first lap, but completely differently.  They’re nothing but in the way of me getting to the end of this race in second place.

As I get to the top of a small rocky rise, both of my calf muscles lock up in excruciating pain.  There is no way in hell I will stop to work that out.  I keep pedaling in this frustratingly rigid motion, as the muscles refuse to flex.  This has never, ever happened to me before but my only thought is that I will ride it out and hope they resolve.  They have no choice, because I’m not stopping.  Not now.

I charge full gas into the final technical descent, nearly eating shit at least twice over the handlebars.  I have to reign myself in, reminding myself repeatedly that I actually need to finish the race.  All of the adrenaline is firing.  I can’t see the other racer anymore, but the paranoia is too great.

Very close to the finish the trail switches back under a ski lift, and from out of nowhere come half a dozen racers directly toward me.  I have no idea what the fuck is happening, and I’m half delirious at this point, but I’m mostly confident that I’m in the right and they’re all wrong.  Either way, someone is going the wrong way.  We pass impossibly close at speed and one of them clips me in the ribs.  Somehow no one crashes.  There is some shouting among them, and it is quickly worked out that all of them took a wrong turn.  Near disaster.

Minutes later it’s the finish, and I have seized second place from the jaws of mediocrity.  I’m eight minutes behind the winner, and put seven minutes into third place. 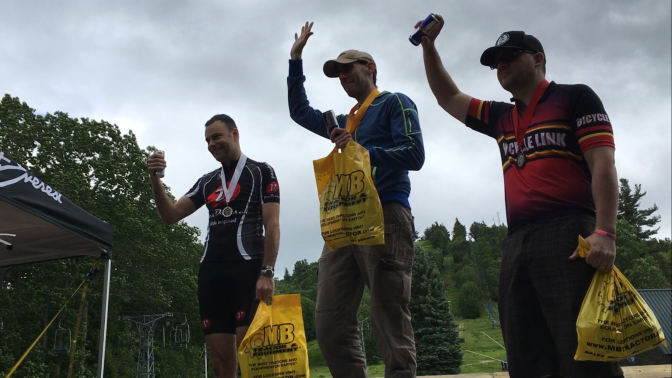 At the podium ceremony, I am made aware that today’s races are USAC State Championship events.  As it turns out, I’m the only one in the field who is actually from New Hampshire, and I am crowned the NH state single speed MTB champion.