The 22×23 fixie had been the plan all along, but I hadn’t really considered the implications of truly bad weather.  Which is kind of insane.  I’ve been on Washington in nasty weather before, and for some reason I was believing I would have these idyllic conditions to ride in.  Wishful thinking maybe.  After checking the forecast, I realized I needed a Plan B.

So hours before I left for the north country, I cobbled together a backup bike.  With only about an hour to work with, the Trek was going to be too much work to tear down.  Only barely built up, not even having been fit on it yet, the G&T got the call.  Somehow I had enough parts laying around to pull it off.  26t up front, 34t out back, so plenty of options. 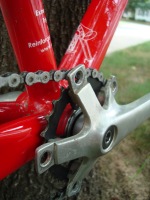 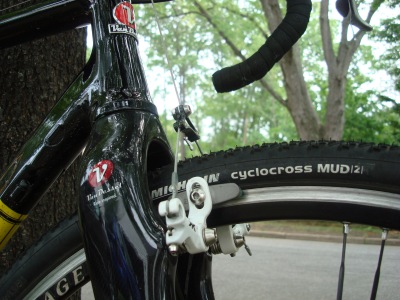 Day of the ride I’m up at 4am; I check the summit conditions on the observatory website.  Temps are in the 50s, which is great, but winds are 50-60mph.  I’ve been up in 40mph gusts before, and it’s doable, but not particularly fun.
60mph, as Grampie and I have discussed – this is highway speed.  Stick your hand out the window the next time you’re driving that fast, and then think about riding a bike in it.  If we were even going to be allowed on the mountain this morning, there was just no way the fixie was going to work.  Looks like the Van Dessel was going up.

Except that it wasn’t.  Winds were picking up, summit gusts were hitting 70mph, and the ride was cancelled.  Mary offered an option to ride to mile 2 unsupported, which we decided against.  Instead, we packed up and drove 2.5 hours to Ascutney, hoping to salvage the day for the Langster. 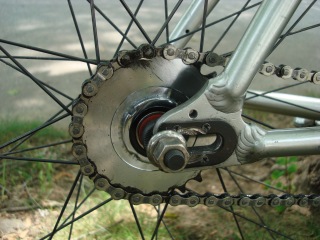 22t ring up front, the 32t in place for insurance.  A Soma 23t track cog out back, and while the axle is well within the dropouts, there’s just enough for the nut to grab on to.  Looks sketchy, but it held up over two runs of Ascutney.


I think Ascutney is brutal.  In spite of a number of small respites that come along, the grades are very difficult, especially when you don’t know the road and it’s hot as hell.  There are punchy, sustained grades that even Wash doesn’t dish out quite so early.  Mile for mile, I think Ascutney is harder.


It’s widely known that Ascutney, in some ways, simulates Washington.  Having done Ascutney twice now on the fixie, I can’t really say definitively whether or not Wash would have been doable on this bike.  Wash I was primed and ready for, and had the wind cooperated, I feel like I was mentally and physically in a place where it could have happened.  The Ascutney rides were hours in the car later, nutrition was all out of wack, it was so much hotter, and the temps do not drop off on Ascutney as they do on Wash.

I don’t think I’ll make it up for Saturday’s rescheduled practice ride, so it looks like this is the end of the fixie experiment on Wash for this year.  I’m definitely taking gears up for the race, just because I need to make better cadence than I can get with 22×23.  That’s the practical limit for me with fixed gears, unless I have custom fabrication done.