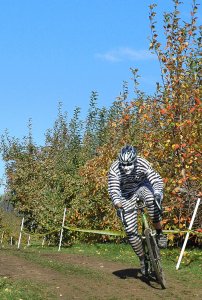 A few shots KO snapped at Applecrest Farm today. I entered the Orchard Cross costume race, which seemed like a fun way to wrap up the year. 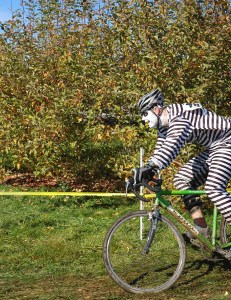 All of our good costume ideas came a little too late, so I ended up wearing this. One guy called me Beetlejuice; a few other guys yelled GIVE ME BACK MY MONEY MADOFF! every time I passed them. 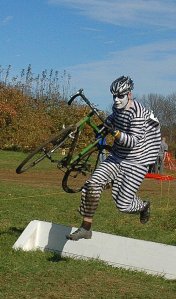 It would appear that I jump barriers like a champion. I would love to know where that energy and enthusiasm is during the parts of the race where there is actual pedaling of the bike.

So note to self – remounting the bike wearing baggy pants is extremely sketchy. One lap I actually got denied by the saddle twice, the pants catching and landing my ass square on the rear tire. I finally nailed the technique on the last lap.