I don’t what the hell I was thinking. I hadn’t been on a road bike in a week and a half due to fatigue, had been sick since Tuesday night, rode Wednesday night in the woods anyway, and had basically written off the weekend. By some stroke of magic I woke up Sunday feeling halfway normal again, and decided that a good way to get back on track would be a leisurely, low-key ride from the Warner Park-n-Ride to the summit of Kearsarge.

It’s a 6 mile ride to the toll gate at the bottom of the mountain, and I’d say by mile 2, Grampie and I were basically gassed. He was coming off of two straight days on his 42×16, and was near the end of his legs. I was no better off, having prepared the day prior by riding the couch, fueling up on triscuits, cheese, most of a huge bottle of V8, and half a box of Lindt chocolates.

A dog came out of the woods when we were in sight of the toll gate, and I begged it to bite my leg so I wouldn’t have to climb the mountain. The dog came right up to me as I pedaled up the final grade before the gate and just sort of stared at me, watching me pass. Thanks dog.

A few hikers informed us that the road was clear all the way to the summit, so we embarked. I noodled along the best I could, wanting as easy a ride as possible. Yeah right. An easy ride straight up the side of a mountain. Kearsarge is never easy. Idiot.

While not clean, the road was clear of snow and the new pavement still very very sweet under the wheels. About halfway up, several small sections of snow greeted the both of us, but you could pick a line and ride through all of them. Barely. Even a week ago, I sincerely doubt that would have been possible. We may very well be the first this year to ride all the way up. Grampie gets the honor of the first nonstop ride. I totally screwed a line through the last snowpatch and hit the deck, landing in the mucky grass alongside the road. Probably the only time I will ever crash climbing Mt. Kearsarge. I’d say not too many have done that, so that would be my distinct honor of the day.

The day was gorgeous, the temperature was really nice, and the top of the auto road was exceptionally quiet. There’s never a bad day up here. So I did a little showing off for Fat Cyclist. 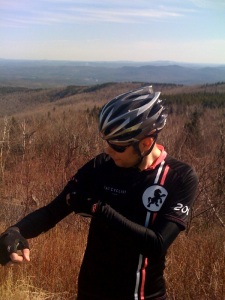 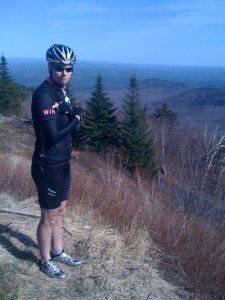