That is a pretty bold claim right there – Post of The Year. Prepare yourself as I back it up.

I have seen a lot of sh*t in my day, but this takes the sh*tty cake. Hands down – no contest. This is the most insane thing I have ever seen, and it is the epitome – the essence – of the Jabe. The JBC. Joe Business Class. And I mean honestly, who better than the JBC to serve as the foundation for Post of the Year. Who else even had a chance? Maybe the turkey in the middle of the road. We’ll give him 2nd place.

The JBC – the Jabe – is noted for his consistency. Effectively, he is consistently an asshole. This world exists for one reason, and one reason only – him. Here’s a short list of behaviors which, I feel, define the species Jabe, and just stay with me here because it’s an important foundation for what I am about to present to you.

So let me get on with it already.

It’s Friday, and the day has been in slow motion. The time just isn’t passing. Every time I look up, it’s 2:30. A miracle happens, and it’s 4:30. Just before I pack up my stuff, I head to the can and take a leak, since it’s a long ride home, and I regularly do the peepee dance with about 15 minutes left in the drive. It’s usually a very close call; if I don’t go before I leave, I will literally have to dance through my house like an indian until I can get to the bathroom. I regularly run from my car to the front door of my house holding my crotch, and I have definitely pissed in my yard before. Anyway, that is completely irrelevant.

As I’m walking back from the bathroom, WONK WONK WONK WONK the fire alarm goes off. It is extremely extremely LOUD. In fact, it is so loud that I have to cover both ears with my hands. It’s incredibly obnoxious. I go back to my office and grab my backpack and coat, and I hear a woman say that she can smell smoke. Right away I think to myself how dumb I am to have gone back to get my things. We have a lot of drills here, but today I get the feeling that this isn’t a drill. It also doesn’t dawn on me that it’s 20 degrees outside and dark and they probably wouldn’t schedule a drill at 4:30 on a Friday night. you ass

Everyone is running down the stairs. This is definitely not a drill. I start running too, and we all congregate in front of the building, looking at the building for signs of fire but everything looks pretty much normal. Then I look to my right, down the sidestreet, and there are police and fire crew everywhere. Word travels fast that there is a car on fire in the parking garage under the building. I go around the corner and have a look, and there is smoke and it smells horrible. There are hoses and pissed off firefighters and water is everywhere.

I go back up to the front of the building, and so this is essentially the scene, just to give you a frame of reference. There is absolutely nothing special about this situation. It is just people standing around like they usually do when there’s a fire alarm.

Chris what is the point? There is no story here. You’re all outside in the cold. So what, there is a car on fire in your building. That might sound like something huge but it really isn’t.

Study the photo above very carefully. Because I am about to show you the pinnacle – the topmost point – the Mount Everest of Jabedom. This is the cover of JBC Illustrated. What it means to be a JBC is encapsulated precisely in what I am about to show you. At no time in the history of man has one single photograph been able to capture such pure, concentrated Jabe. Ever.

Before I show this picture to you, take one more look at the photo above. Click on it to get a better look. It is dark. We are all outside, it is about 17 degrees, and the fire alarm is still blaring as it has been doing for the last half an hour straight. The fire alarm is going off because there is fire in the garage under the building.

As I’m mulling around in the cold, I look in one of the windows on the first floor. In fact, it is the window in the middle of the above photo. I can’t even believe what I am about to photograph. 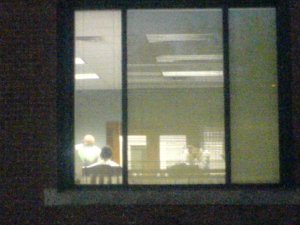 Fire be damned. These Jabes don’t have time for fire. They have time for one thing, and one thing only right now, and that is a meeting. Sure everyone else has evacuated the building because it might go up in flames. And that’s fine for you if you’re a normal person and work for a normal company. But if you’re a Jabe, you play by different rules – your own. You need this board meeting. Fire be damned, this concall is going to happen. I don’t care if the car explodes and we all die, we’re not leaving this room until we get these numbers right. Just because we can’t hear each other speak doesn’t mean we can’t get this proposal finished. This is our office and we call the shots around here, not some prick fire chief. Now shake my hand that I never wash.

One thought on “Amazing Jabe, how sweet the sound”