Good things come to those who wait
So sometime around 8pm on Saturday we get home from Justin’s birthday party in Franklin. Upon my return I had big plans, and all of them involved using water. I was aiming to do a load of dishes in the dishwasher, and double up on the good times with a load or two of laundry. I decide to go with laundry first. I grab an armful of my nastiest cycling apparel, and make my way to the basement stairs. Somewhere about halfway down the stairs, I hear a toilet flush, and then from in the basement I hear…a sound. Not just a sound though. A gurgle. A gurgle that tunnels directly to the center of my soul and says “sir, you have a major major problem”. Sure enough, I round the corner from the bottom of the stairs and there it is. It’s my last major trip to the bathroom…all over the floor in the corner of my cellar.

I can’t really describe to you what it’s like to have human waste in your basement. Floodwater I have had, and I hate floodwater. Hate it. It is the worst possible thing you can have. It comes in uncontrollably, and you are helpless and powerless to stop it. But know this. Floodwater you can get rid of. You can pump it out into the street or your backyard or illegally pump it into a huge soapstone sink in your basement. When your shitter pipe is plugged, you’ve got NOTHING. You’ve got crap on the floor and nowhere to flush it. In some countries you can chuck it out into the street but we haven’t been doing that here for a few hundred years. That leaves you with basically -0.1311 options. Also I should mention it F*CKING SMELLS AWFUL. While acclimating to the smell I had two solid dry-heaves and I was certain both would result in loss of meal. At any rate I believe this now renders pee and feces as the worst possible thing you can have. I do not recommend. Play around in an unflushed toilet for a while and let me know if you have a good time. It’s similar. 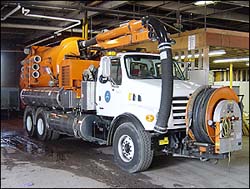 So I call the city, and they come out around 9pm with a massive, massive tanker truck. It’s learning time! They grab a huge pick and pull a manhole cover up about 50 feet from my driveway. 12 feet below the street, there it is – a gorgeous river of poo flowing beneath us, carrying away everything that we’re too good for. You would be surprised to know how accessible it is. It’s like a nearby but very secret hiding place with old-timey brickwork. You stop to think how old this sewer must really be, and the kind of craftsmen it took to build something like this, and then the smell hits you like an anvil to the face and you back away to the curb.

The boys from the city then run an enormous hose off a reel and into the sewer line, firing a continuous stream of water that would annihilate even the most daunting offering from anyone on my street. Put it this way, if you had flushed a diaper, cat, or baby down your toilet and it jammed up the sewer main, it would disintegrate into a billion pieces. These guys told me that sewer main is fine, and good luck.

Then the fun started. John showed up around 10pm, and I don’t even want to tell you the details of what it took to unclog my sewer line. It was nothing I will ever write about. It was 3+ hours of man’s work and that’s the end of it. Well, not the end. Just the end of the part you don’t want to know about. Then there are the days to come of bleaching floors and working Purell under your fingernails to kill the poop germs because the smell of your own hands keeps you awake at night.

Poopsy-daisy
Just know this. Don’t you ever, ever flush a paper towel. Ever. I swear to you, don’t you ever do it. Bounty is some serious, serious sh*t. It doesn’t break down. Ever. You get a few of those hung up on a sewer pipe running under your foundation, and guess what – you might as well take a dump on your floor and roll around in it.

Do not kill bugs with paper towels and then flush them down the toilet.

Even if you accidentally run out of tp and there is no other recourse – none at all – and the only thing within reach is a roll of paper towels, you go without. You chalk it up to poor planning and figure something else out, fudge butt. You’re the one too stupid to stock up on the essentials for human life.

Why the hell couldn’t I have killed them with toilet paper; this would never have happened.

Even if you have to blow your nose – just one time – make the conscious decision to do the right thing and dispose of the towel in the trash. Not worth the gamble my friend.

Come on they were spiders. I would have killed them with gloves and flushed those too if I had them.

Even if – listen you get what I’m saying. They don’t print “safe for septic systems” on a label for nothing. You may never have truly considered those words but now is a good time to consider what that really means.

Honestly I would have caught them and let them free outside but they wouldn’t stand a chance and that’s more cruel than crushing them to death with paper towels.

So bottom line – yes the whole thing was my fault. Stop telling me how dumb I am. You’ve all done the same thing at some point and the only difference is that I got screwed and you probably didn’t. Anyway we’ve mopped with bleach several times already. Come over and let’s eat off of the floor.