Oh man am I fired up. You know this asshole. He’s the guy that sees you coming and has ample time to react to the path of your vehicle, yet deliberately makes no effort whatsoever to do so. If you’re changing lanes, for example, he will hit the gas from a thousand yards away to make sure your lane change completes with his face cemented to your rear bumper. I don’t know exactly what runs through these peoples’ minds, but its more likely than not a river of urine and feces with hospital waste floating in it. I fucking hate these people and they are everywhere.

So this morning I bang a right off the Portsmouth ramp, and my light is red. This is no problem because the only car to my left is a red Saturn shitbox that I gauge to be at least 500 feet away. Right on red. 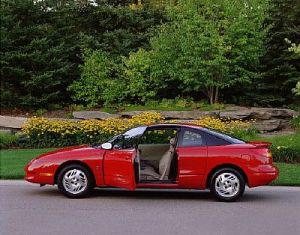 All of a sudden, this fucking maniac is RIGHT on my rear bumper, and impact seems imminent. This POS has to be doing 60+ in 30, based on the fact that he simply materialized behind me. Having already been rear ended in the Suby and less than enthusiastic about the prospect of going through that nightmare again, I crank the wheel left, and watch the antics unfold as this jackass cuts his wheel right to swerve by, the suspension of his Saturn coupe well beyond its limits, his car swimming like a fish as he narrowly misses my right rear quarter panel. WOW. Seriously, it was close.

Which suprises me. Look at the picture. This vehicle has a racing pedigree a mile long. I mean if you ain’t seen a Saturn SC 3-door run a quarter mile sprint alongside dale junior tradin’ paint on lap 300 caution be damned we’re runnin’ it tires to the cords 4th gear matted doin’ 204mph down the back stretch in atlanta cylinder down and we’re takin’ it to the wall rev limiter screamin’ fer mercy where am i going with this.

Then, someone notices that I’m trying reeeeeeeeally hard to make out their license plate. As I have learned from past experience, when someone realizes that their plate is being read, they RUN. The ambassador to Pennsylvania then banged the next left at 1,000,000 mph and disappeared down a backroad. I would have followed him and at least got all of the numbers, but today I didn’t give a sh*t. I would have called the police, and they would have done approximately nothing. Now I’m pissed off for doing nothing. I should go look for him.